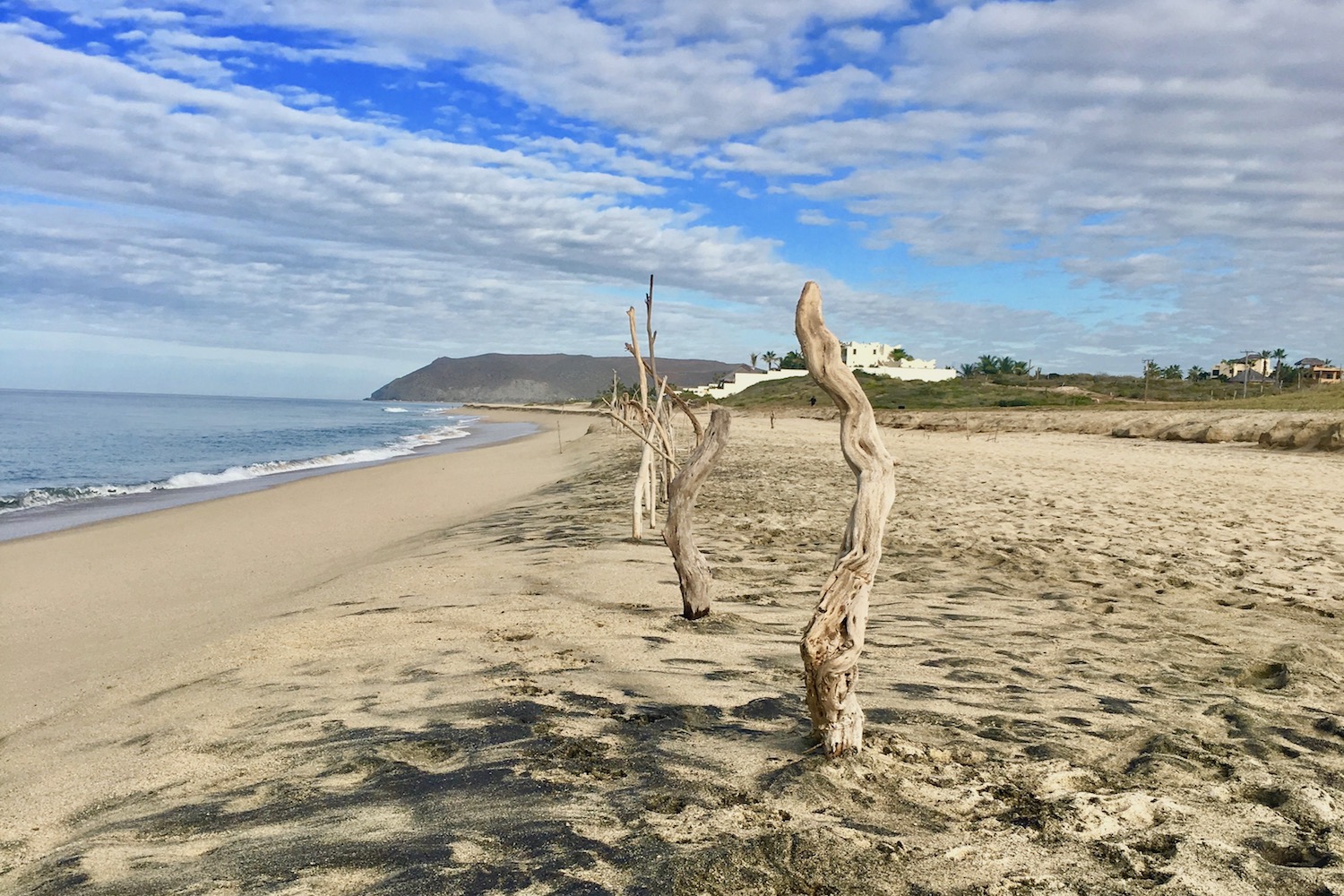 06 Jan The Stick, the Whale, and the Butterfly

Posted at 13:52h in Personal Growth by Isidra Mencos 0 Comments

A story of transformation and rebirth

The sticks were lined up on the shore, close to the surf, but not quite in it. Some of us had chosen a piece of wood thick as a beam and buried it deep in the sand. Others long poles that rose with the pride and grace of a Masai spear. Others yet, short and thin twigs, their wispy appearance belying how firmly its sharp tip held on to the earth.

I walked a long time along the beach trying to find mine. I settled for a slightly crooked, medium height piece of drifted wood that came up to my navel, about two inches in diameter. It was neither imposing nor insignificant. It mirrored my latent fear of being inconsequential and my wish to melt into the background, where I could lick my wounds. But what really attracted me was its top. The last four inches opened up like the flames of a fire or a tense fist slowly unfolding: a small sign of hope that all wasn’t dead inside me.

I tried to sink the stick deep into the sand, but the compacted, wet surface presented surprising resistance. Not content with its grip, I made a mound around the base, pressing the sand firmly with my hands, trying to avoid the inevitable: the moment the waves would pull it up and throw it out to sea.

Chip Conley, author of Wisdom @ Work and founder of the Modern Elder Academy, where I had gone for a one-week workshop, had told us before hand that this uprooting was precisely the point. The sticks, planted between the earth and the ocean, represented the liminal space between adulthood and elderhood —a time that, like all transitions, can be deeply uncomfortable. Still, I wanted my stick to hold, perhaps to compensate for the fragility of my own self.

I arrived at the Academy in Baja California grieving the recent loss of my mother and depleted from four months of caregiving a very sick friend. My husband and I were entrusted not only with managing his healthcare and providing him with comfort, but also with his worldly affairs, which were more complex than we could have ever envisioned. Everything else in my life had fallen by the wayside: my writing, my business, my daily meditation, time with family and friends. I had panicked dreams of being lost, and moments of uncontrollable sobbing when exhaustion, stress, and grief engulfed me. As I focused on caring for him my own being got erased.

Each of the sixteen members of our group had come to the Academy for a different reason, but many were going through disconcerting change. Some had lost their jobs or longed for a career pivot. Others had retired and wanted to find meaning in the next stage of their lives. Others yet, had a personal riddle they needed to solve. When I enrolled several months prior, I had no inkling that I would be reeling from the loss of loved ones and the emptiness of having abandoned my own path. After a couple of years of writing workshops, I simply wanted a retreat that focused on personal growth.

Over the course of the week, the curriculum emphasized the idea of evolving from a fixed mindset that holds you back to a growth mindset that allows you to learn and renew your place in the world. Like a caterpillar slowly dissolving within the cocoon, only by letting go of our old persona can we find the seeds that contain the next step in our evolution, and form the wings that allow us to fly.

As emerging elders, many of us were moving from the wish to prove ourselves—by accumulating money, titles, and other signs of external success—to the urge to improve ourselves, by redoubling our focus on values and legacy.

Through discussions, experiential exercises, meditation, and breaking bread, we all opened up without reservations. We listened to our dreams and our sorrows, and revealed the blocks holding us back. We shed tears, shared laughs, danced, and learned from each other. Vulnerability and trust, beautifully modeled by Chip, bound us together. The resident shaman, Saúl, brought us the blessing of nature outside and inside us, while Teddy, the meditation teacher, offered calm and insights. Christine Sperber ran the logistics with efficiency, creativity, and warmth.

Every morning I walked the beach to look at our sticks. After a couple of days, I wasn’t sure which one was mine, because it had been utterly transformed. The top—that tense fist finally unfolding and opening up to the sky—was nowhere to be seen. Only the mound of sand holding the wood to the earth gave me an inkling of which stick to claim. Towards the end of our stay, the stick I had identified as mine had a crack running through the middle, mirroring how I felt: broken open, open to rebirth.

The last morning, I got up at six thirty and started to pack. I was lodged in a house a little apart from the rest, with three other housemates. As I lifted my eyes to the window, I saw a huge humpback whale jumping joyously out of the water. Her whole body came clean up in the air, and back down with a big splash. Awed by her power and gracefulness, I went out into the balcony. The whale kept jumping, right in front of my window, for five or six minutes, filling me with wonder and delight. I was so awestruck I didn’t even think of taking a photo or filming until the very end of her rapturous romp. I later found out that my housemates, either away from their windows or already out of the house, had not seen her.

I walked to the main house, deeply moved by what I had just witnessed and wondering what message the whale was offering me. As I took my last stroll on the beach, I noticed that the wind from the previous evening had finally shown us the way in the difficult path of letting go of the past. Most of the sticks had disappeared, carried away in the surf. Others lay on the ground, a fertile offering for the next students of the Academy, who would arrive in a couple of weeks.

Back home, I researched the meaning of whale as a spirit animal. It couldn’t have been more fit for me, a writer trying to find the way back to her craft:

When Whale arrives as your spirit animal, it’s often during a time of emotional and physical duress in which you’ve lost your sense of self…. This is the gift that Whale offers—the ability to cope and function in highly pressurized situations until you can come up for air and reclaim your inspiration and clarity…. Choosing a Whale as a power animal means finding your celestial music, your personal song and your true voice.

The week in the Modern Elder Academy helped each of us transition to the next step in our journey. We put behind what didn’t serve us any longer, gained clarity on our life’s purpose, and strength to realize it.

Chip has set up to disrupt the way our society views people fifty and up, from dead weights to wise counselors. But we also need to change the way we perceive ourselves. Within us lies all we need to find a meaningful path.

Being a messy blob of discarded shapes and thoughts is distressing. You feel tempted to hold on to the past—to protect your stick from the pounding of the waves—but only by learning to be comfortable with the uncomfortable, you are set free to shape your very own, far-reaching flight.