02 Apr Be still and obsess to create the best art

Posted at 12:10h in Writing Tips by Isidra Mencos 0 Comments

I recently went to a couple of art exhibits that made a deep impression on me: Claude Monet and Vija Celmins. These artists seem very different at first, but they share a key trait: the ability to be still in front of a landscape until it reveals all its richness.

It took me a while to understand my water lilies… I cultivated them without thinking about painting them… A landscape doesn’t captivate you in just one day… And then, all of a sudden, I had a revelation—there was magic in my pond.

Vija Celmins says something similar about the desert landscape:

At first, I thought there was nothing there… I was always having to adjust my eyes back and forth—both far and close, which is how I think about my own work sometimes. It lies somewhere between distance and intimacy. 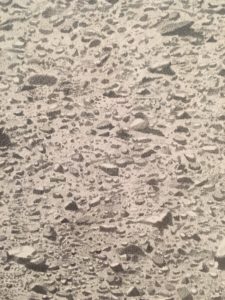 This careful observation and deep findings translated for both artists into an obsession. The sheer amount of water lilies paintings in Monet’s exhibition (De Young Museum, San Francisco), was awe-inspiring. He just couldn’t stop painting them: in every light, in different colors, from various angles. Because if you can be still and look deeply, any subject is inexhaustible.

Celmin’s renderings of the sea, the starry sky and the desert lands are monochrome. This Latvian-American artist used only black graphite pencils of different scales for her early work. She later experimented with oil paintings, but kept the same sober palette. But just like Monet, she created an enormous amount of work on the same subject. An example is the piece below, where she presents an identical image of the sea (based on a photo she took) with black graphite pencils of varying hardness and scale.

This process is similar to that of a writer, both across length and depth of work. Many writers rehash the same topic book after book, with slight variations. They come time and again to their obsessions, to the topics and stories that haunt them. For example, they may first treat the topic of violence, incest, and being a misfit in fiction, and then in memoir, like Lidia Yuknavitch. Or they will obsess about the effect of consumerism in the nascent bourgeoisie in a dozen novels, like Balzac.

Writers also come again and again to the same book, trying to capture on the page the vision they have on their head.

Revising a whole book from beginning to end is a daunting task. Unlike a painting, you cannot see it all at once. You have to muddle through hundreds of pages, looking at the big picture, while keeping attentive to details. As difficult as it is, many authors write dozens of drafts of their manuscripts, trying to capture their vision, just as Monet did:

These landscapes of water and reflections have become an obsession. It’s quite beyond my powers at this age, but I need to succeed in expressing what I feel. 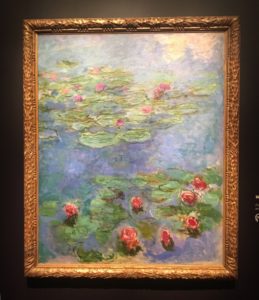 As I struggle revising my memoir yet again, these two exhibits inspired me because they reminded me of the obsessive nature of art. I found comfort in knowing that many artists have the same revelation: You need to be still to really see. You need to observe the world not just with all your senses but with undivided attention, if you want to create the best art. You need to keep coming again and again to your work, hoping one day you’ll get close to capturing what you feel and you’ll finally bring it forth in the world.